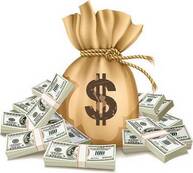 We always have raffles throughout the year. Click the money bag above for the current raffle. Both members and non-members are encouraged to participate. The raffles help RSCA to fund for our yearly operations.

​Trapshooting is one of the three major disciplines of competitive clay pigeon shooting (shotgun at clay targets). The targets are launched from a single “house” or machine, generally away from the shooter. It differs from skeet shooting where targets are launched from two “houses” in somewhat “sideways” paths that intersect in front of the shooter. Trap shooting is typically shot with a 12 gauge shotgun. Smaller gauge firearms (e.g. 20 gauge) can be used, but no allowance is given. Trapshooting is shot at either single or double target presentations. This refers to the number of clay targets which are launched simultaneously. Trapshooting shotguns can be adjustable. Stocks may have a “Monte Carlo” (fixed, raised “comb”) configuration and/or include a comb height adjustment, a butt plate adjustment for length, angle or both, with typically having longer barrels (30-34 inches), possibly with porting and featuring tighter chokes to compensate for the longer distances at which trapshooting targets are broken. The majority feature interchangeable choke tubes as opposed chokes of a “fixed” constriction. Common accessories include wearing a vest or pouch that will hold at least 25-50 cartridges or “shells” for singles and/or doubles events. Most ranges and clubs require eye and ear protection, as well as Rostraver SCA. American Trap typically uses lead shot ammunition, with shot sizes (for lead shot) #7 ½ and #8’s Commands from the scorer and other shooters are as important to squad timing. To start a squad the shooter will ask if the squad and scorer are ready (calling “Squad ready?” then “Scorer ready?”), followed by asking to see one free target, traditionally saying, “Let’s see one.” Five rounds are fired from each position. The scorer will call missed targets with a command of: loss, lost, etc. When the first shooter has fired their final shot of the position the scorer will sometimes call “hold one” or “ready on one” and will command “all to walk ” or “walking ” after the fifth shooter has fired their last shot. The shooter on position five then moves to position one behind the rest of the shooters on their way to the first station and will signal the first shooter who is now on station two, that he is ready to shoot. The squad moves to the right after each five rounds. The standard call for a target is “pull,” but many shooters like to use their own variations of “pull,” or words that will help them concentrate on the target. Five rounds are shot at each station. Shooter who started on position one is considered the squad leader. He always shoots first, no matter what position he is on after rotating. Additional information about trap and about the Amateur Trapshooting Association sanctioned events can be found on their website HERE.

Trap Shooting events are open to the public! The shoot features voice activated releases, and is operational year-round. The trap club house is heated for those cold days, and is air conditioned for the hot summertime days. Free coffee is always offered, and free food monthly! New shooters and their families are always welcome, so please come and shoot with us!

If you have any questions or for information, please contact the Trap Chairman
Club Meetings:
Meetings are held the 3rd Monday of each month at 7:30 PM at the club hall located here.